Although the national Republican Party was founded in 1854, activity was sparse in Texas and Bexar County for many years. There was one early blip on the screen during the 1920’s when Harry Wurzbach was elected to Congress, becoming the first Republican elected official in Bexar County. He served until Franklin D. Roosevelt became United States President. During the remainder of the Roosevelt years, the Party maintained a fairly low profile.

However, the 1952 Eisenhower-Taft battle for the Republican nomination brought new life and new members to the Party. In those days there were precinct meetings but no primaries and that led to chaos in 1952. Many people voted in the Democrat primary but then went to Republican precinct meetings that evening to support Dwight Eisenhower. Senator Taft’s people were upset. Credentials challenges abounded, along with rump precinct, county, and state conventions. Two groups went to the National Convention requesting to be seated. Since Eisenhower controlled the Credentials Committee, his delegates were seated and he won the nomination. Eisenhower went on to carry Bexar County in the 1952 and 1956 elections.

The first Republican Primary happened by accident. In 1954, Republicans cross-filed Allan Shivers for Governor and he received 200,000 votes, kicking in an election code provision which required “real” primaries in 1956. In 1956 Republican Jesse Oppenheimer challenged Henry B. Gonzalez for State Senator. The next primary was not held until 1962, but we’ve been having them ever since.

In 1960, Bill Steger ran for Governor and received 650,000 votes. At the same time John Tower ran for the U.S. Senate against LBJ and got 900,000 votes. Locally, Ike Kampmann, Jr. ran for State Senate against Gonzalez. LBJ’s election as Vice President set off a series of events that caused a perpetual election cycle in 1961. There were 71 candidates in the U.S. Senate special election, but John Tower eventually won the state by 30,000 votes and carried Bexar County by 10,000 votes. John Goode then ran a spirited race against Henry Gonzalez for Congress, Jimmy Helland took on Franklin Spears for State Senate and Henry Catto and Raymond Russell, III ran against Glen Kothmann and Rudy Esquivel, respectively, for State Representative in special elections.

In 1962, the Bexar County GOP captured its first three elected officials. We elected two Justices of the Peace — Bob Strickland and Frank Vaughn (who gave Blair Reaves his only defeat) and Constable Bill Hancock who switched parties and ran for reelection as a Republican. 1964 saw the election of Jimmy Helland as Commissioner, Precinct 3, who was the first Republican at the Courthouse. A permanent county party headquarters was established during that time and has been maintained continuously for almost 40 years. It is now the only county party headquarters that has continuously open since 1959. The Party was gaining.

In 1972 Jim Nowlin and Joe Sage became the first Republicans to represent Bexar County in the Texas Legislature and Doug Harlan ran such a strong race against 30-year Congressman O.C. Fisher that Fisher retired in 1974. In 1974, in spite of Watergate, Doug narrowly lost to Bob Krueger. Jeff Wentworth was elected County Commissioner in 1976.

The 1978 election proved to be a watershed year. Bill Clements was elected as the first GOP Governor since Reconstruction and Tom Loeffler defeated Nelson Wolff with 57% of the vote, becoming the second Republican to represent Bexar County in Congress. But possibly the biggest news was Tom Rickhoff’s election as District Clerk — the first county-wide GOP official at the Courthouse.

In 1980, Alan Schoolcraft and Kae Patrick won hard-fought races for State Representative, but the Democrat-controlled Legislature refused to seat them. This triggered a special election in which Schoolcraft obliterated his sour grapes foe. There were now 3 GOP State Reps for the first time. Lamar Smith and Cyndi Krier were leading the Party then.

Another watershed year came in 1982 when we finally cracked the courthouse wide open with the election of Roy Barrera, Jr., Tom Rickhoff, David Peeples, and David Berchelman as District Judges. Lamar Smith was elected Commissioner and State Rep. George Pierce switched parties. In 1984, Cyndi Krier became Bexar County’s first Republican State Senator with her defeat of an entrenched Democrat opponent and in 1992 she became our first Republican County Judge.

The 1994 elections proved to be another banner year for the local Grand Old Party (GOP). Thousands of ballots that had not originally been tabulated were discovered during an official recount which resulted in Janet Littlejohn finally being declared the winner in the 150th District Court race; the GOP had achieved a majority of the District Judges. We also had won a majority of County Court at Law Judges and a majority on Commissioners Court. After Reagan Greer returned the District Clerk’s post to the GOP column in 1998, Bexar County Republicans enjoyed a 4 to 2 edge in county-wide courthouse officials.

The Bexar GOP was really on a roll and history had changed for good. Now, more than 50 years after our rebirth in 1952, no one jokes about the Bexar County Republican Party anymore. 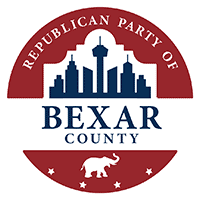